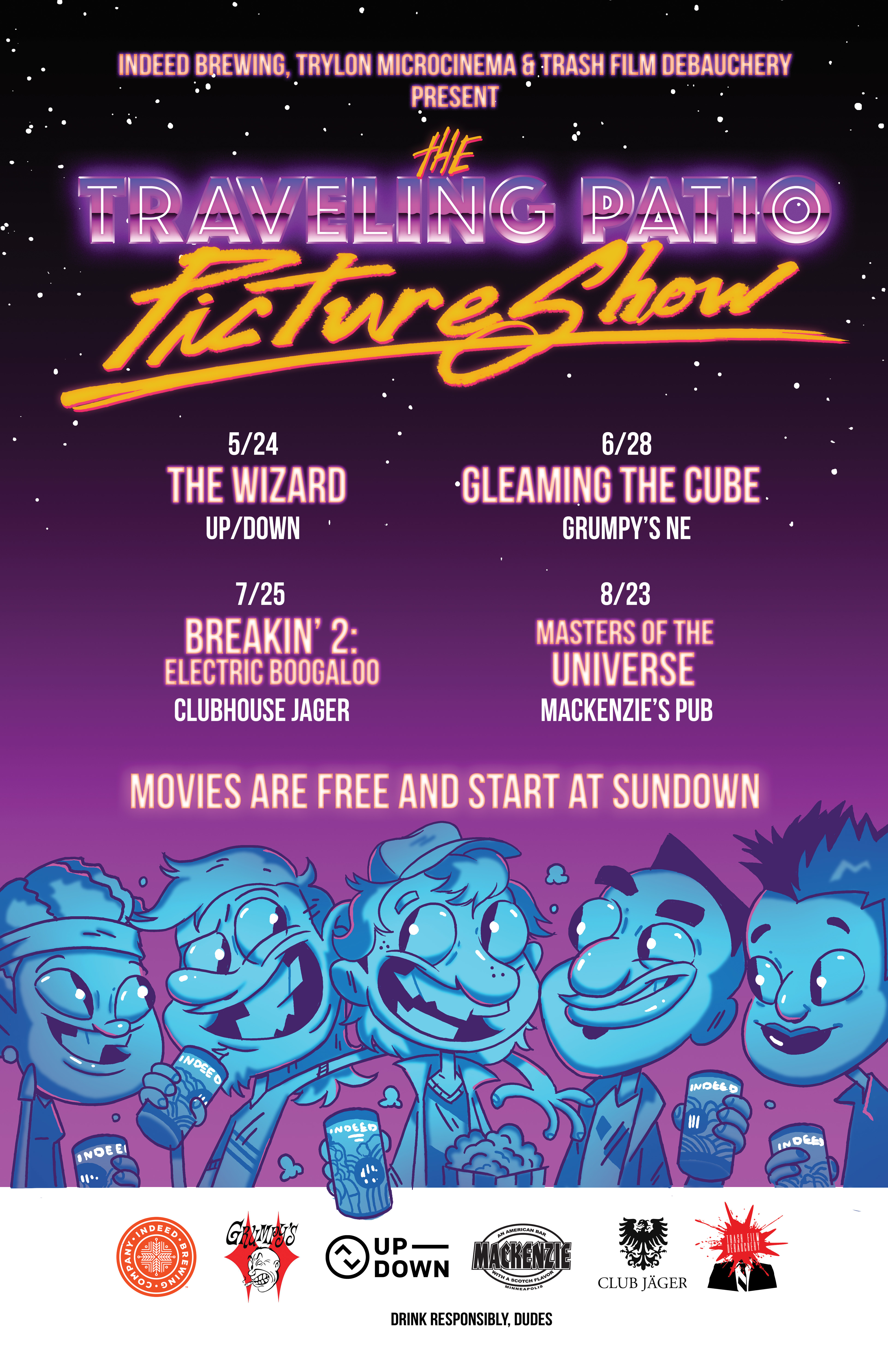 The Traveling Patio Picture Show Rolls Back Into Town

Ready for another summer of cinema under the stars? The Traveling Patio Picture Show is back, presented by Trash Film Debauchery, Indeed Brewing Company and Trylon Microcinema. Take in four totally rad 80s movies at Up-Down Minneapolis, Grumpy’s NE, Clubhouse Jager and Mackenzie Pub. Because we love you, all movies are free to attend and start at sundown (around 8:30pm). So grab a beer, take a seat, and get ready to enjoy the show!

After his little brother, Jimmy (Luke Edwards), is put in a mental institution, Corey (Fred Savage) breaks him out and the pair run off together to California. On their travels, Corey meets a girl named Haley (Jenny Lewis) and discovers that Jimmy is a master at playing video games. With talents like his, he could easily win the top prize of $50,000 at Video Armageddon. While the three travelers hitchhike to the competition, the boys' parents hire a bounty hunter to track them down.

Slacker Brian (Christian Slater) discovers his adopted brother, Vinh (Art Chudabala), has been killed and his murder made to look like a suicide. With the help of a local detective Al Lucero (Steven Bauer), Brian and his skateboarding crew featuring Buddy (Tony Hawk), Yabbo (Max Perlich) and Gremic (Christian Jacobs) work together to solve the mystery and avenge Vinh’s death.

Disappointed with her small part in the chorus line of a Los Angeles show, jazz dancer Kelly (Lucinda Dickey) quits and heads home. Her father (John Christy Ewing) disapproves of Kelly's friendship with street dancers Ozone (Adolfo "Shabba-Doo" Quinones) and Turbo (Michael "Boogaloo Shrimp" Chambers), and encourages her to pursue an opportunity to perform in Paris. Ignoring his wishes, Kelly teams up with her friends for a break-dancing benefit show to save an endangered community center.

When the evil Skeletor (Frank Langella) finds a mysterious power called the Cosmic Key, he becomes nearly invincible. However, courageous warrior He-Man (Dolph Lundgren) locates inventor Gwildor (Billy Barty), who created the Key and has another version of it. During a battle, one of the Keys is transported to Earth, where it is found by teenagers Julie (Courteney Cox) and Kevin (Robert Duncan McNeill). Now both He-Man and Skeletor's forces arrive on Earth searching for the potent weapon.